As a follow up to my previous post on how I got through a brick wall, here’s an account of a will from which it was possible to squeeze some valuable information. Warning: this post is about research techniques and is probably not interesting to anyone except me!

I was able to order a copy of the will of John Richards Burbidge (d. 1873, brother of my GGGG Grandmother Elizabeth Burbidge) directly from the government’s probate service at https://www.gov.uk/search-will-probate. Less than a week after I ordered it, a scanned copy was available for me to download.

While I’m still struggling with many of the open questions from the end of my last post, this will answered many other questions I didn’t know I had yet!

John opens with a bequest to “Louisa Cole daughter of my cousin Ann Cole, ” which intrigued me. Soon after he mentions bequests to his nieces Elizabeth Chapman, Julia Moore and Mary Luning. He also mentions his niece Esther Monger alongside his grandchildren.

This gave me absolute confirmation that all my previous research was correct – among other things, John had to be Elizabeth’s brother if Julia Moore nee Blackburn was his niece.

But I was more excited about “Louisa Cole daughter of my cousin Ann Cole”, since the identity of any cousin of John (b. 1785) would surely provide clues about the family of his mother or father. Would it be possible to figure this out? If Ann Cole was John’s cousin, she would have to have been born one of the following:

I searched birth records for each of these possibilities but turned up nothing conclusive. It occurred to me that the best way to find them conclusively would be to search for Ann and Louisa Cole in the same house.

findmypast.co.uk has a good search interface customised when you’re in a particular record set. So I searched the 1851 census for Louisa Cole, with Ann (include variant spellings) in the same household.  This brought up 2 or 3 possibilities. I then did the same for 1861. One result stood out:

At this stage I was still not certain. Both Louisa and Ann were still in Brighton in 1871, and I had inferred from will that perhaps Ann was dead by then (if not, I wondered why John specifically left money to Louisa and not to Ann).

However, a number of factors started to point in the right direction:

I was of course very lucky – since Ann had an unmarried sister living with her, I had her maiden name.  The name was also a familiar one – Ann Pugh had been a witness in Elizabeth Burbidge and William Blackburn’s marriage. I now know this was Elizabeth’s aunt (or her aunt’s daughter).  Armed with the census information, I now had the following baptisms to search for:

Searching on Louisa first, one candidate jumped out.  It’s slightly hard to be definite because the years of birth given in each census varied wildly (although in once case the enumerator has clearly swapped out the ages of the sister and daughter). It appears that both Ann and Louisa are about 5-10 years older than they’ve said they were: 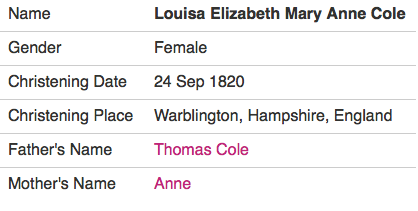 For Ann, there was only one real candidate in the baptism records: 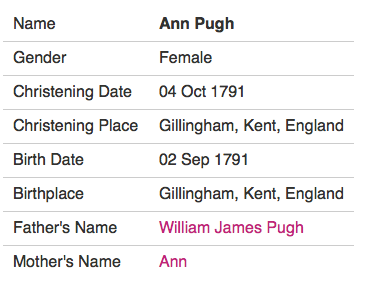 While still speculative, this seemed promising. I then found this marriage: 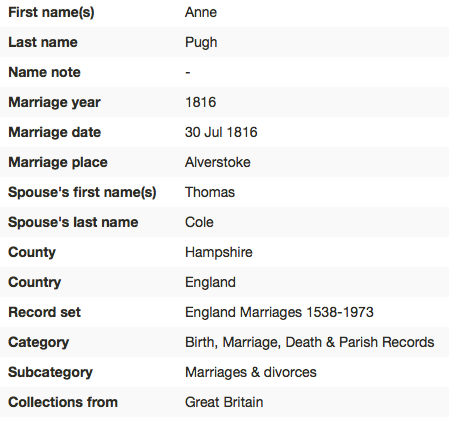 Ann Pugh married Thomas Cole on 30th Jul 1816 in Alverstoke. It’s not far from Emsworth. It’s probably them, but I’m not too worried about it. What I’m really interested in is Ann’s parentage, so I can confirm how she is the cousin of John Richards Burbidge.  If her father was William James Pugh, that’s quite a distinctive name, which is encouraging.

This left me with the following hypothesis to research:
–  William James Pugh married Ann ??? (Richards or Burbidge I hoped!) some time before Ann Pugh’s birth in 1791.

I was flabbergasted to find the following almost immediately: 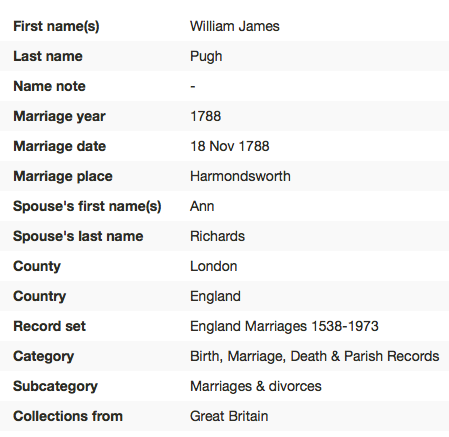 Bingo! Thanks to John’s bequest to the daughter of his cousin, I now knew that my 5G grandmother Mary Richards (later Burbidge and Gravatt) had a sister called Ann.  Coupled with a kind message by the writer of the parish record (‘mother from Thorpe, Leic.’), I now had far more to go on when seeking Mary’s baptism.

Sure enough, I was able to find five children, baptised 1757 to 1763, of John Richards and wife Mary in Thorpe Acre, Leicestershire.  The five children were John, Dorothy, Mary, Ann and Elizabeth.

While more proof would be welcome, I’m now satisified I have the correct baptisms. As well as Mary and Ann, I note that the witnesses at Ann’s wedding were Dorothy and Samuel Cole.

A quick search of the records (here I’m lucky the marriages were happening in London parishes where the records have been preserved) revealed that Samuel Cole married Dorothy Richards in 1782 (with sister Elizabeth as a witness!). While I don’t have absolute proof of this, it appears that Ann Pugh and her husband Thomas Cole were first cousins. 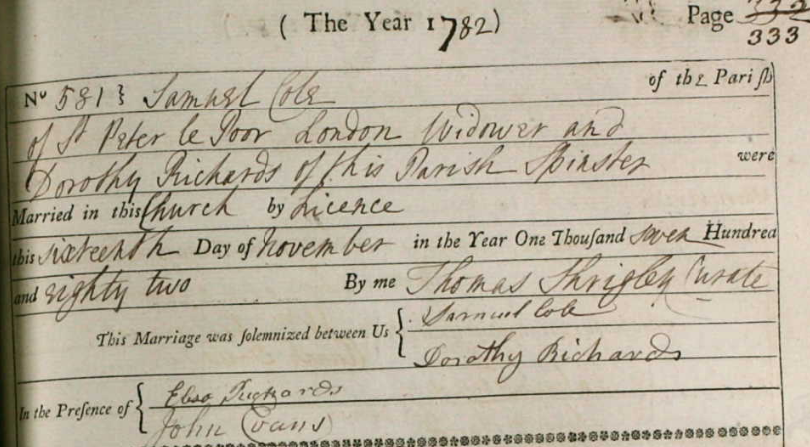 I can now welcome John Richards (senior) and his wife Mary into my direct line of ancestors.  And a quick google of “John Richards” “Thorpe Acre” even brings up what’s almost certainly Mary’s grave at Dishley Churchyard:

2.     Mary wife of John Richards of Thorpe Acre d. 1776 aged 39.  Stone 2 x 4 ft., curved top with border decoration.  Engraver – N. Webster.  Verse: Within this grave a social friend is laid / Who hath the common debt of Nature paid / When living, honest, generous and kind / Now dead, a loss to all friends left behind / But she’s to happy regions wing’d away / Where souls enjoy soft rest and endless day.

While I had to work for it, this was a very pleasing haul from my £10 investment in John Richards Burbidge’s will, and 145 years on, I’m very grateful to him for his generosity to his cousin!

One point for further research: the names ‘King’ and ‘Cave’ come up as middle names.  At a guess, Cave might be William Burbidge’s mother’s maiden name, while ‘King’ might be John Richards’s wife Mary’s maiden name.  I haven’t been able to corroborate either.

Next up – a summary of my (so far forlorn) attempts to track down William Blackburn!