I’ve been lucky enough to have had access to some amazing artefacts from my family history, including old photos from around the world, and carefully preserved documents revealing ancestor names. Probably my favourite of these is a memoir written by my grandfather’s brother Wolfgang for their sister.

Written in German, it runs to about 35 pages and provides an engaging history of all the relatives that Wolfgang knew and/or had heard about.  It’s deliberately anecdotal and no sources are given.  Needless to say, I’ve taken it upon myself to try back up and flesh out the stories he tells.

Wolfgang’s mother, my great grandmother, was Rosa Benjamin (1880-1927).  Wolfgang tells a vivid story about Rosa’s great grandfather, Benjamin Dolziger, who was apparently murdered in a forest in 1820. Thereafter, we’re told, his son took his first name as his last name, and became Israel Benjamin. 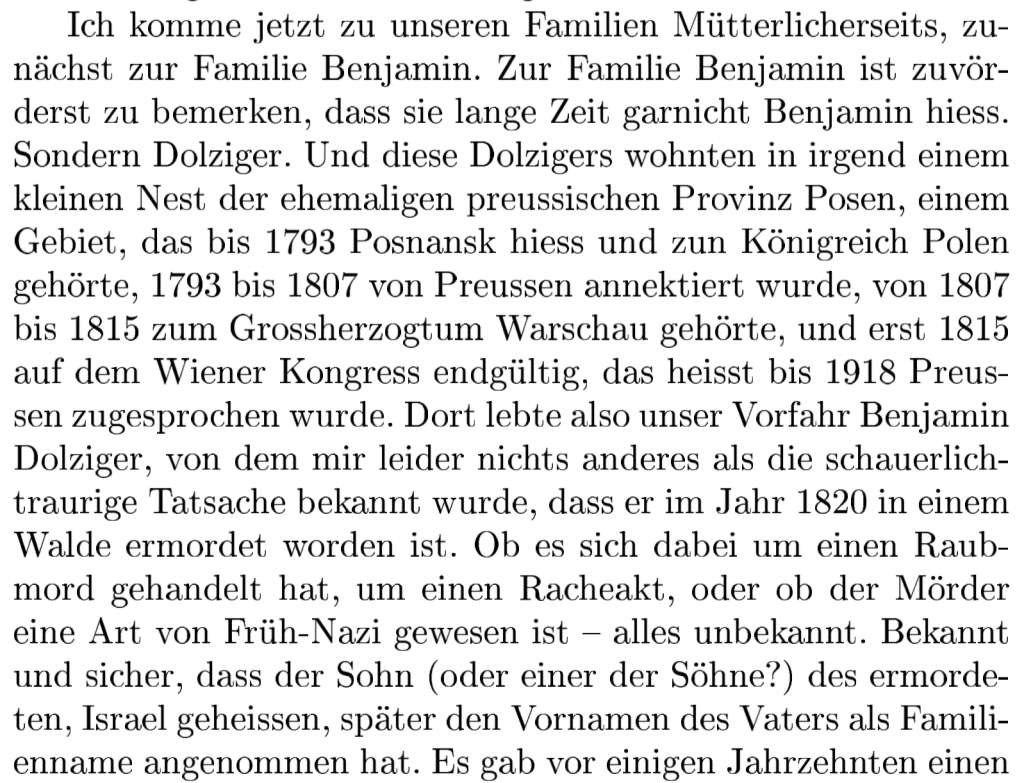 This is all very atmospheric, but in terms of bare facts all we have is that a man called Benjamin Dolziger died somewhere in the province of Posen in 1820.  Unsurprisingly, there are few death records from Posen dating back this far. I had also drawn a blank with the name Dolziger – nothing seemed to come up.

As happens so often, corroboration came via researching cousins and siblings.  Wolfgang explains that his maternal grandfather Isaac Benjamin had cousins who were called Jakubowski, so Isaac’s father Israel must have had at least one sister.  He provides enough information about the Jakubowski siblings to give me a shot at finding them, noting there were two boys, Gustav and Ewald, and two sisters: Flora, who married “one of the rich Schottländers”, and another who married a Phillip Königsberger who lived in the Höfchenstrasse. This address is confirmed in a Breslau directory from 1915:

At this point I had the notion of Posen as a place of origin (albeit vast area), and some biographical details.  I had some early luck. It turns out that a kind of census was taken in Posen from 1870-1931. This seems to have been more akin to the British 1939 register in that names and dates of birth, but no occupations were taken, and the entries seem to have been kept updated as people married/died/moved etc.

Anyway, some persistent searching led me to a series of census records for this family. These are very hard to decipher but I did get used to the handwriting,  Key bits of info, such as the Königsberger and Schottländer marriages, plus the fact that they had all moved to Breslau, helped me to pin things down. Without these distinctive first names this would have been very difficult, particularly since ‘Jakubowski’ seems to have been used interchangeably with ‘Jakubowska’. 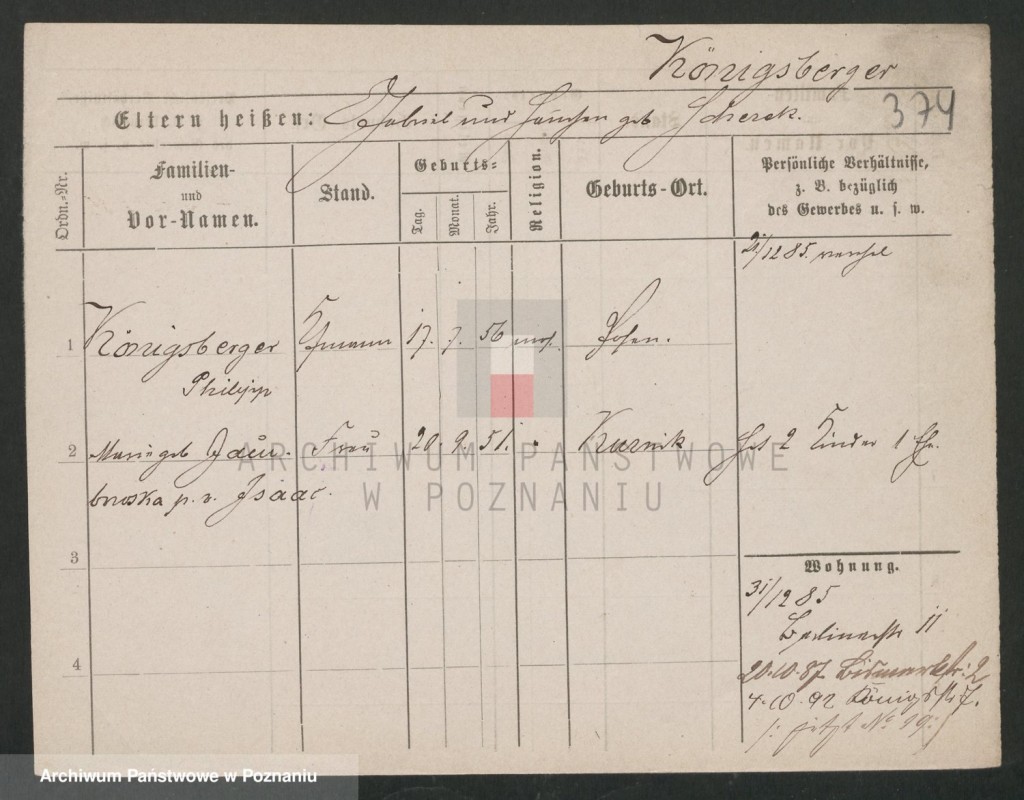 The quickest way I found to search the Posen census was to do a site search with a phrase: site://e-kartoteka.net/ “lastname firstname”.  Some kind people have done a simple index of all the digital records, which is an enormous help as the names can be very difficult to decipher and you could easily miss what you’re looking for if you just browsed through them. 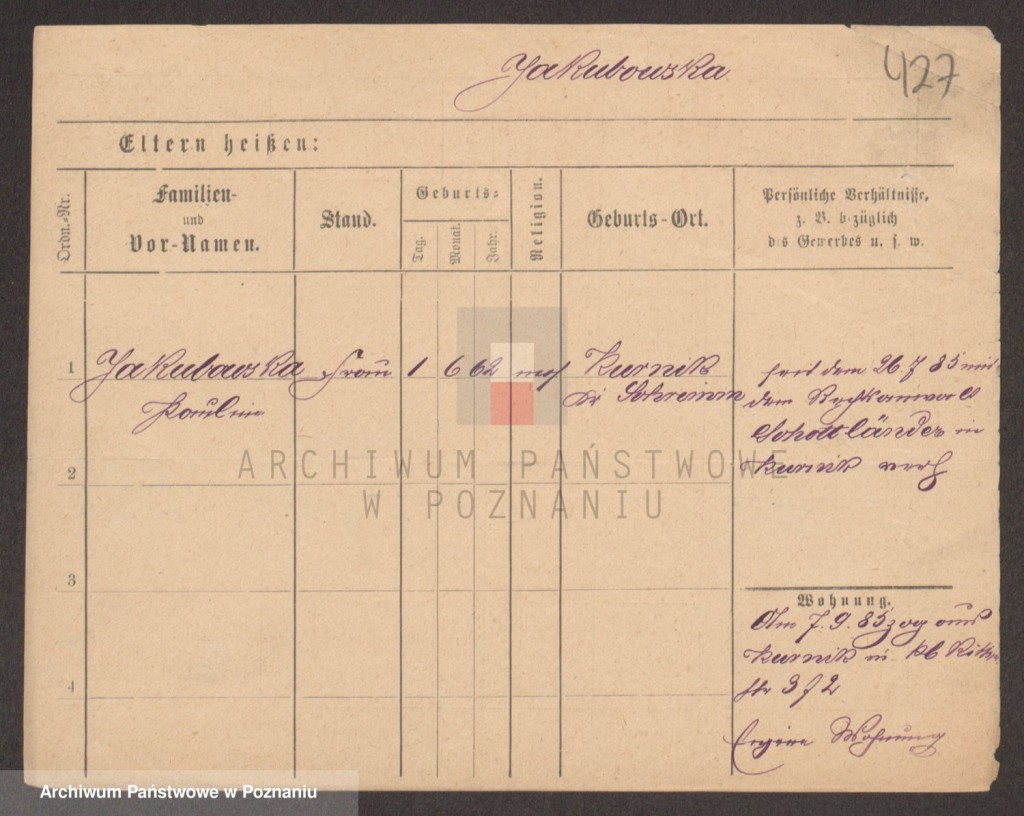 It was good that they included dates of birth, as the above mentioned Flora also went by the names of Pauline and Vogel!  All the records showed a home town of Kurnik (aka Kórnik, Poland). This gave me something to work with, including some additional sister names.  As well as Flora, there was Bertha and Marie.  But since the parents weren’t living with any of the children, and I didn’t know their names, I had no way of finding them.

Searching for Flora and her husband Schottländer, I found another amazing online resource, the Familiendatenbank Juden im Deutschen Reich, which had a transcription from Flora’s marriage: 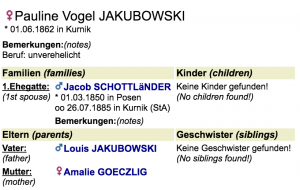 I now had the parents’ names and the tantalising suggestion that my legendary ancestor who was murdered in the forest was called Goeczlig, not Dolziger!  I contacted the owner of the site, who very kindly sent me the original marriage record (which in fact was on the same site as the census, the incredible but somewhat hard to navigate http://szukajwarchiwach.pl/).

The name as written was definitely Goeczlig, which was great for clarity, but didn’t fix the fact that searching for this name produces zero records!

At this point I stepped back from the search. After all, I had no firm proof these people were related to me at all, and I couldn’t see how I was going to get any further for now. This was perhaps a eighteen months ago.

But yesterday while researching some of my partner’s family nearby, I came across the Poznan Project again. This is an online project to index marriages from the 19th century in the Posen area.  I’d been able to find the marriage of her Polish great great great grandparents, who had emigrated to the USA, and this revealed the names of four new ancestors.

Then it occurred to me to search for Jakubowski weddings, and the following came up:

Bingo! This was my first evidence linking Amalie and the Jakubowski family to the name Benjamin.  Strangely, this was 1880, five years before Flora’s wedding, so it’s curious that the maiden name is given here as Benjamin, yet five years later Flora used the original, Goeszlig.  The original record was available via http://www.szukajwarchiwach.pl/53/1876/0/3/22/str/1/3/15/7AUijAJYwvt6MSYUeWmy1Q/#tabSkany so I was able to double check.

And then today I found Ewald’s death record which similarly names Amalie Benjamin.

I can now say with reasonable certainty that my GGG grandfather Israel Benjamin was originally called Goezlig/Goeczlig/Goezlik and that he had a sister called Amalie.

He’s a butcher (as was Israel Benjamin), and was registered in Kurnik in 1836. If this is our man, his death might have been later than 1820 as estimated by Wolfgang. If a civil record of Israel’s death somehow materialises (he might have died a week or so too early depending on when exactly civil registration began in Breslau!), I might be able to corroborate this.

Riveting stuff (well, it might be of some interest if you’re related to me!)