There’s no magic formula for getting through “brick walls” – aka stubborn ancestors about whom we can discover so little that we can’t trace their line back any further. For me it has always come down to a mixture of persistence and luck.

All I knew about Elizabeth Burbidge was that she had married William Blackburn in London in 1807.  Even this knowledge was slightly sketchy – I knew that William had married someone called Burbidge and that his daughter Julia (my GGG Grandmother) had been born in Southwark, London. This led me to his marriage to Elizabeth Burbidge.

Coming at the right time and in the right approximate place, I had to assume this was the correct marriage. But I had no concrete proof of this – that is, nothing to prove that this was my William Blackburn.

When I examined the original marriage record, there was a paucity of information. This is typical of parish records of the time. While baptisms can sometimes reveal the father’s occupation, the main points of interest in marriage records is often the witnesses or signature.  In retrospect I realised I was lucky. The marriage record indicated that the bride’s mother was Mary Gravatt, widow, and that at the time of the marriage, the bride was above the age of 18 but younger than 21.

This gave me a birth date for Elizabeth of between 20/6/1786 and 18/6/1789.  Surely this would be enough!  Alas, no.  A different Elizabeth Burbidge was baptised in Southwark at about the right time, but I could find no other likely candidates in England whose birth was recorded around these dates.

I could find just one marriage that fits – between a Mary Burbidge and a William Gravatt, at Shoreditch in 1804. I believe this was indeed the marriage, but it describes Mary as a spinster, whereas I believe it’s likely she was a widow. I may never know for sure.  Since the record itself gives no additional information, this left me no closer to revealing Elizabeth’s parents or place of birth.

Next I turned to newspapers. All that came up for Gravatt and Burbidge together was a dissolution of a partnership between Mary Gravatt and John Burbidge, linen drapers. This sounded very promising (Julia Blackburn, Elizabeth’s daughter, had been a linen draper), but the date seemed all wrong – the dissolution was in 1830. Plus if Mary Gravatt had been a widow, surely the Burbidge character was long gone!

Like many other brick walls, I returned again months later. This time, when I searched with just Gravatt and Burbidge (that is, no Mary), a story came up that opened up a door into the life of the Burbidges.

It took a moment to sink in, but in this short paragraph there was an enormous amount of information:

I was able to establish quite quickly that John Burbidge had been set up in business with a man called Thomas Puzey as ‘Manchester Warehousemen’, which I understand to mean linen dealers, at 58 Bread Street, city of London. The two of them. Here’s a mention of them in the 1843 voting log:

The name ‘Puzey’ sounded familiar.  The next development was that John Burbidge’s full name was John Richards Burbidge.  I was at first sceptical that these were the same person, but another newspaper report confirmed that they were:

This put me in a great position to find out more about the family, but realistically, I had my hopes pinned on there being information in John’s will (he died in 1873):

But of course, John’s longevity meant I still had the census as a source of information. However, he proved tricky to find.  One confirmed entry in 1861 has him living as a widow at the house of his daughter’s family (she married Henry Doughton Pulford). This gives his age as 75 (approx birth 1786) and his birth place as Welford, Northampton. It turns out that the Burbidge last name is popular in this area, and no obvious baptism emerged.

I was stuck, but then with some determination I was able to find him in the final census of his life, in 1871, at the same address reported in the will calendar, 27 Clifton Hill.  His name, written illegibly, had been transcribed as John R Bunbridge.  Here, his place of birth was written as Leicestershire, Harboro [?]. If I hadn’t absolutely known this was the right person, I might have doubted it, but looking at the map shows that Welford is right on the border of Northamptonshire and Leicestershire.

At this point I hit the jackpot with a search on Freereg. Using their ‘nearby places’ feature, I searched for John Burbidge near Welford, Northamptonshire, and got the following results: 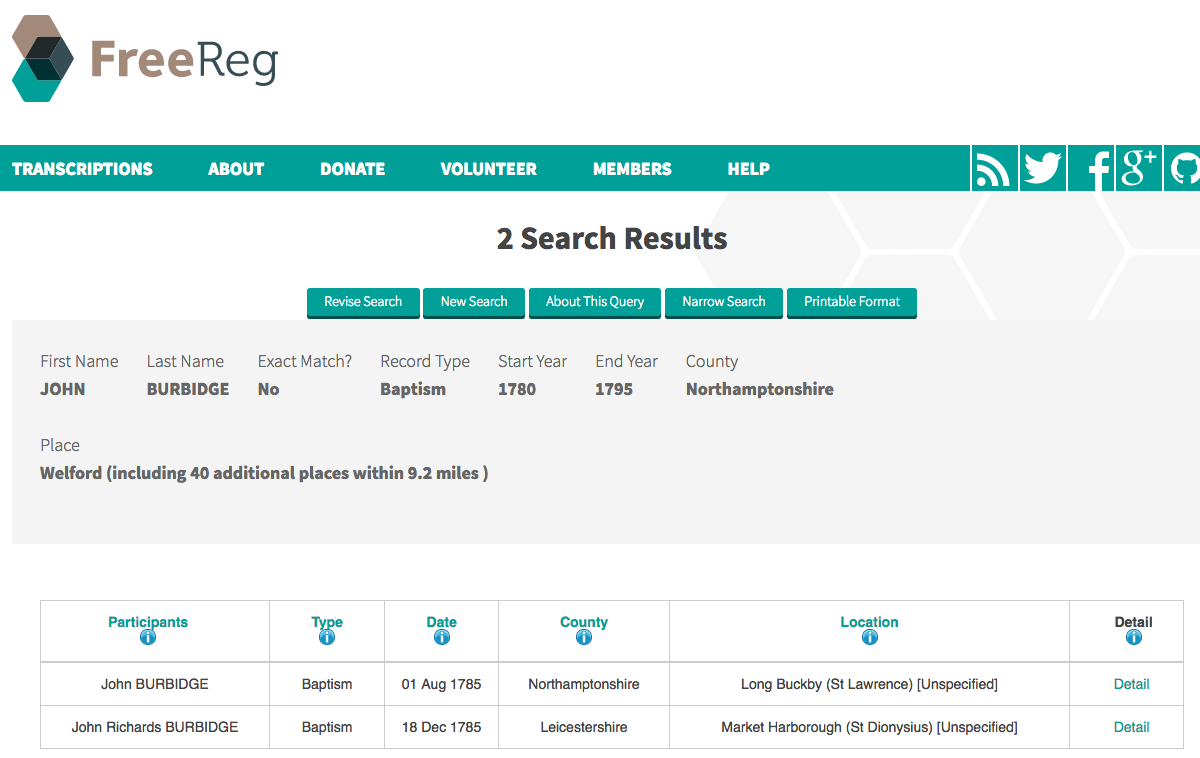 This is quite possibly his advert in the local paper: 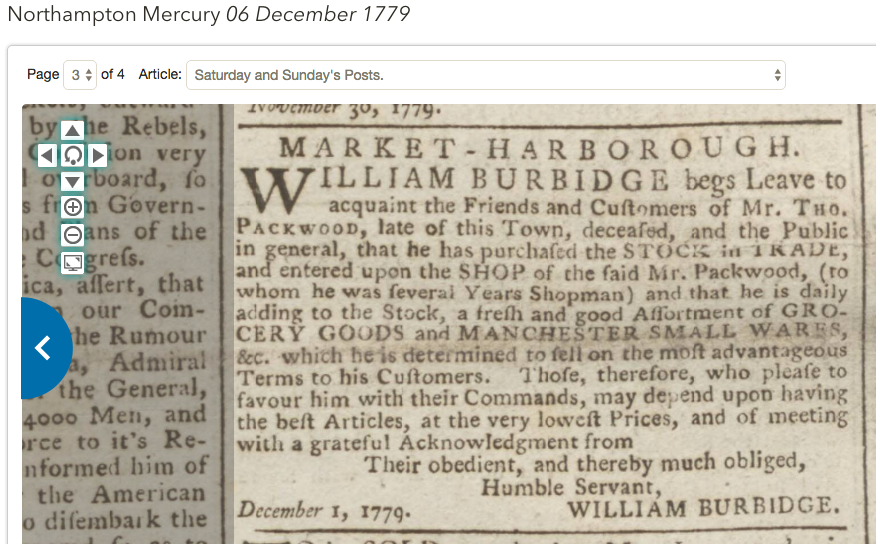 The biggest success in all this is actually in the name Puzey.  The name was familiar to me because Julia Blackburn (William and Elizabeth’s daughter) was in the drapery business with a Jane Puzey. Jane is a witness at Julia’s marriage, and they are both resident in a house on the High Street in Dorking in the 1841 census.  When I researched this rather unusual name I found that John Burbidge’s partner Thomas Puzey was Jane Puzey’s brother – so my GGG Grandmother Julia was in business with the sister of her uncle’s business partner. This cemented everything I’d discovered and reassured me that I’m not off track.

While I’m delighted to have confirmed William and Mary as my direct ancestors, some big questions remain. I now know much more about Mary (1759-1843) and John (1785-1873) than I do about Elizabeth (born c. 1787) and her husband William Blackburn. Key questions:

To recap on my relation to these people: