I was casually browsing the ‘treetops’ of my family tree when I came to Alice Grey (my 5G Grandmother).

Initially I’d known nothing more about Alice than that she married my 5G Grandfather Valentine Heighington in Stoke Newington, London in 1756.

However, thanks to an old piece of paper preserved and shown to me by my dad’s cousin, I had been able to ascertain that Alice had been born in Lambourn near Wantage, Berkshire, and that her father had been an attorney. Initial attempts to discover anything based on this had failed, and I’d left it at that.

A few days ago I searched again and suddenly found a baptism for an Alice Grey, born in Lambourn and baptised in 1729. It seemed likely that this was her, the birth coming at about the right time, and in view of Lambourn being quite small.  This gave her father as Isaac Grey and her mother as ‘Alice’.  Searching on Isaac’s name revealed that there was indeed an attorney there with that name and at that time, as the old family record had stated.  The same set of parish records had a baptism for Isaac in 1696, revealing his father to be another Isaac, and his mother to be Sarah.

At this point these connections were probable rather than proved.  Isaac’s profession as an attorney led me to think he might have been quite well off, so I searched in the database of wills of the prerogative court of Canterbury. Amazingly, wills existed for both Isaacs and also for Alice Grey, the mother of the Alice Grey I’d already known about. The names of sons mentioned in the wills also corresponded with baptisms for the different sets, so I felt sure of my two Isaacs as 6th and 7th G Grandfathers.  There are also records of Isaac the younger’s apprenticeship, as arranged by his father Isaac.

Alice senior’s will then named her daughter Alice as the wife of Valentine Heighington, confirming definitively that I had the right family.

I then did a Google search for “isaac grey” “lambourn” (note that even single words now have to be in quotes if you want to ensure they appear in the results). By some miracle, a detailed history of Lambourn church, including memorial inscriptions, had been published back in 1898 and digitised at archive.org.

Here I found the following inscription for the younger Isaac Grey (who died 1744 aged 48; I was able to cross-reference this death year with both the probate date of his will and his baptism):

On the east wall of St. Mary’s chapel:

In
Memory of
Isaac Grey, Gent.
who departed this life
Dec the 3rd 1744
Aged 48 Years

He has left a Widow
and four children
Inconsolable for his loss
having been a tender Husband
and the Most Indulgent Parent.

He was ever ready to Assist
The Needy, and to defend
the cause of the Poor
from Oppression and wrong.

He was the great Grand-son of Sr Nicholas Crisp
by his daughr Elizabeth, who lyes bury’d
in St. Mildred, Bread St, London.

I’d never heard of Sir Nicholas Crisp, but I thought that sounded interesting.

At this point I had to be wary – suddenly jumping back 3 generations from a starting point of 1696, a lot could be lost in confusion.  Indeed, there were several different Sir Nicholas Crisps, with different spellings of the last name as you might expect.  One was clearly more famous and notorious than the others (one of whom was actually his grandson). If it hadn’t been for the very last line of the memorial inscription, I would have had no way of being sure which Sir Nicholas Crisp was being referred to, but as it turned out, the famous, notorious Sir Nicholas also had a strong association with the church of St. Mildred, Bread St, London, and was indeed buried there in 1665, the year before the great fire of London. 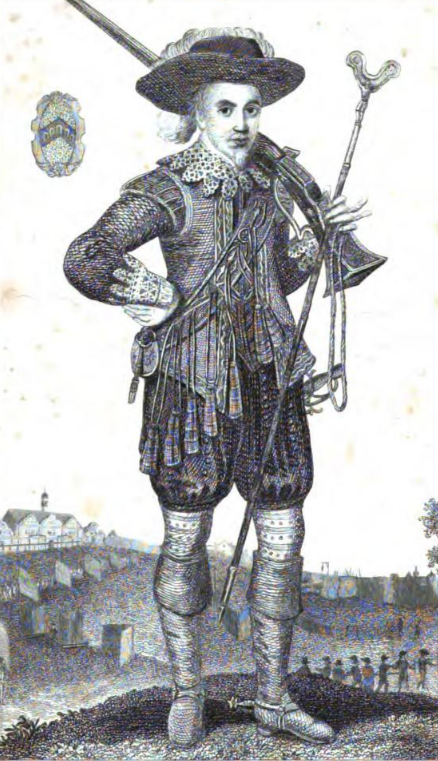 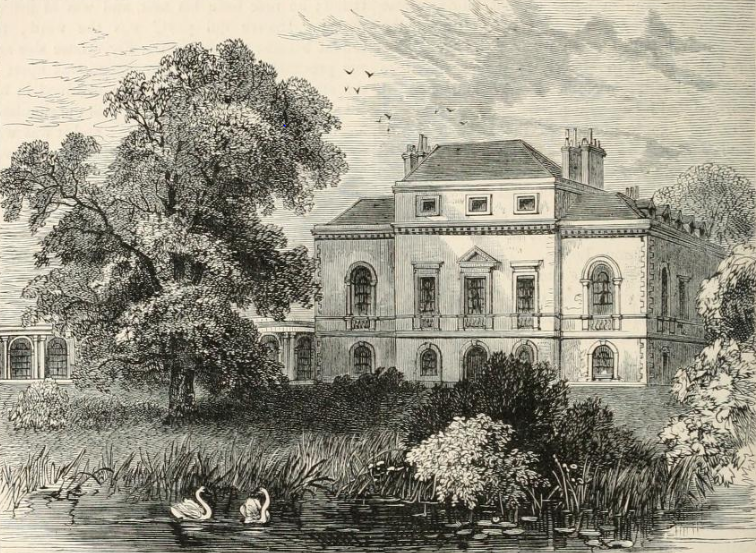 This all blew my mind a bit.

So to recap, the memorial inscription had told me that Isaac’s grandmother was Sir Nicholas’s daughter Elizabeth. I didn’t yet know the path between Isaac and his supposed grandmother. I knew his father was another Isaac Grey, but annoyingly hadn’t been able to identify the last name of his mother, Sarah.

To try and validate and investigate, I first went to Nicholas’s will. This restated Sir Nicholas’s association with St Mildred, Bread Street, and confirmed a daughter called Elizabeth. However, at the time the will was written, Elizabeth was not yet married, so this didn’t give me a last name to go on. Sir Nicholas died in February 1665 aged 66.

So I had to proceed based on the following hypotheses:

I didn’t manage to uncover any marriages, but I did find a useful book online of the parish records of St. Mildred’s, Bread Street. No relevant ‘Elizabeth Crispe’ was mentioned, so I scanned through the pages looking for Elizabeths mentioned around the 1650s-1680s (I knew son Isaac’s father had to have been born by 1680 in order to have had his son Isaac in 1696).  One thing leapt out at me: In 1679 there was a record of the death of Elizabeth, wife of Isaack Gray.  Yes, the spelling was slightly weird, but the name certainly jumped out at me having just uncovered the other two Isaacs.  It could be a coincidence, but perhaps it could be that simple! Nicholas’s daughter Elizabeth married Isaac Grey who had Isaac Grey who had Isaac Grey!

Feeling quite smug, I turned my attention back to wills in order to prove the link.

Again, since these people seem to have been extremely wealthy, I expected to find some Canterbury wills, and I was not disappointed. The key document was the will of Anne Crisp (née Prescott, the wife of Sir Nicholas). Anne’s will was dated 1669, and is very detailed about her offspring and other relatives.

But at first, my heart sank. There was only one mention of her daughter Elizabeth, and her last name given not as Grey, but with another name that I couldn’t read properly beginning with L. It didn’t mention her husband’s name or any children [for her many other children, all these details were given]

I sighed, sad that the Isaac Grey thing had turned out to be potentially a red herring, but nevertheless pleased to have found her actual married name.  After going through the name letter by letter I realised it had to be “Leicester”. Alas “Elizabeth Leicester” is quite a hard name to research, since there are a lot of Elizabeths in Leicester!

I also looked for ‘Leicester’ people at St Mildreds but found nothing.

Then it happened.  I did a Google search for “elizabeth leicester” “crispe” and instantly knew I was onto something. From a book from 1897 called Collections relating to the family of Crispe (Volume 4) [I’d searched the first volume but hadn’t known about the others!], I found this text:

ARTICLES OF AGREEMENT indented, tripartite, made 25 June 1670, between (i) Isaac Gray of of London, citizen, (ii) Elizabeth Leicester of I.ondon, widow (relict and admix of Robert Leicester dec”) and (iii) John Crispe of London, esq, and Richard Kinge of London, merchant, a marriage being intended to be had shortly after, between the said Isaac and Elizabeth. 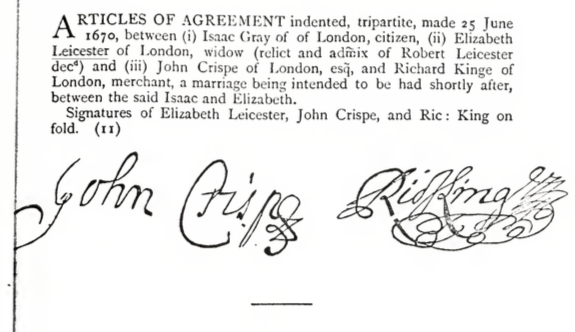 I knew via Anne’s will that Richard King was a brother-in-law and John Crispe was a brother of Elizabeth.  So I had finally found the connection. Note that I wasn’t able to find an actual marriage record, although I did find a possible birth record for Isaac son of the first Isaac, in Stepney, not far from St. Mildreds.

Now I was sure of the connection, I had landed in a ‘gentry’ situation, finding that my ancestors were sufficiently famous/revered/rich that their lineage going back well into the middle ages is recorded in numerous books and publications that are miraculously available to me to read in a few mouse clicks.

Sir Nicholas (alongside his wife, my 9G Grandmother was Anne Prescott; there’s even an original church record for the marriage) features in this tree towards the bottom on the left as ‘Captaine Nicholas Crispe': 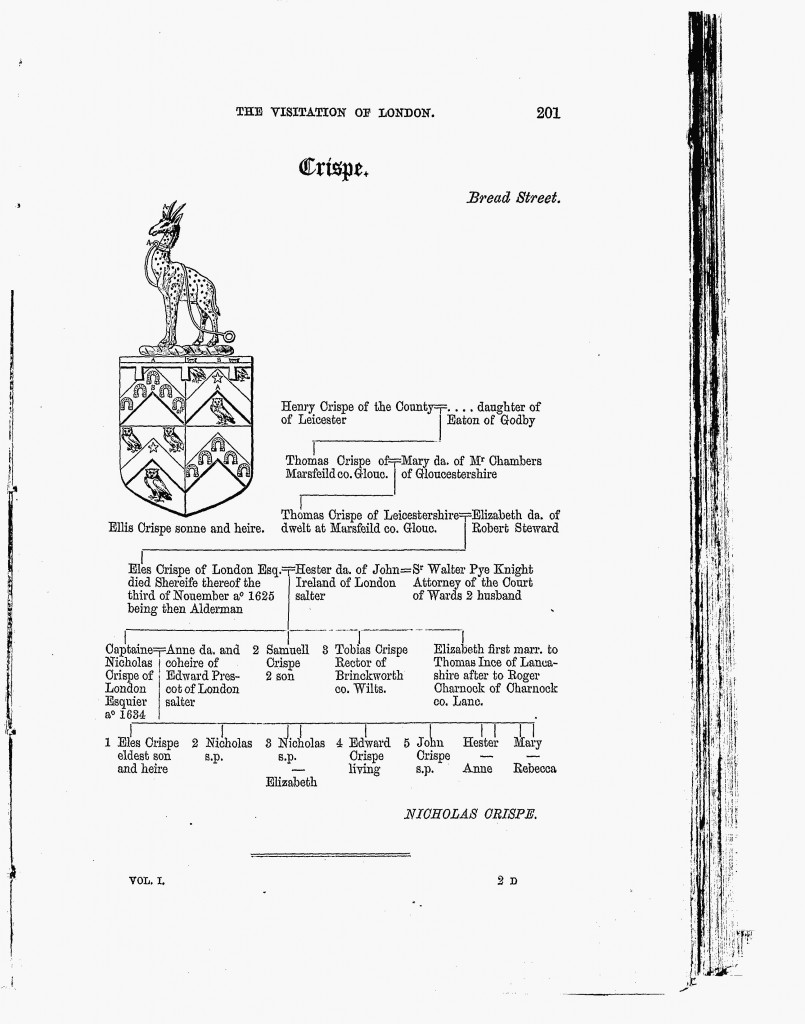 Sir Nicholas’s father was Ellis Crispe, apparently a wealthy businessman from Marshfield near Bath, Gloucestershire who became Alderman of London. His wife was Hester Crispe, of whom a rather amazing portrait exists: 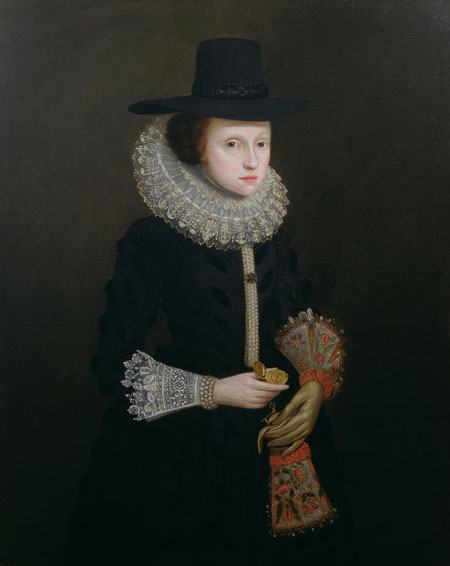 And it goes on  – Hester was the son of John Ireland (who left a will) and Anne Elizabeth Hill, taking me neatly back to another dominant family name!

Having uncovered all this, I’m finding I can go back further in a few places on and near this line (details to come!)

Of course, Sir Nicholas the slave trader is just one of 2,048 grandparents at that level, which makes me a feel a bit better…